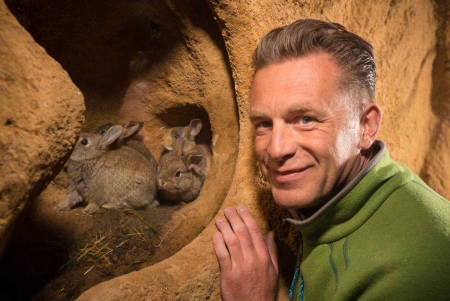 The Burrowers will be presented by naturalist Chris Packham

The 3 part series for BBC Two is a natural history first as presenter and top naturalist Chris Packham takes us on an extraordinary journey underground into the secret lives of some of Britain’s most-loved animals – badgers, water voles, rabbits, stoats and moles.

A real-life Fantastic Mr Fox, THE BURROWERS enters their world to bring new science and animal behaviour never captured before.

It’s TV Production Company DRAGONFLY’s first foray into the world of wildlife television and they do so with typical ambition and scale. They are probably most famous for producing bold factual event television such as Plane Crash as well as using the latest camera technology to reveal family and organisational behaviour.

In THE BURROWERS, Dragonfly creates full-scale mega-size burrows to see inside the underground animal kingdoms of some of Britain’s most iconic wildlife.

The production team worked closely with scientists, vets, conservationists and some of the world’s top wildlife cameramen to build unique filming burrows – a year in the making.

So far the Dragonfly team have scored a string of natural history and science firsts including:

Prepping the Marsh Boat today for this weeks Wild

Merry Christmas to all and a Happy New Year from a

A big thank you to @northnorfolkliving and @sarahw

Come and take a walk on the wild side, as we use t

Fridays Safari out with Steve on his second advent

A wet Sunday Safari, but still smiles all round as

The season has just begun… Out with artist @lucy

Today for one day only we are at Docking Hare Fare

Laying in a hedge observing Pink Feet Geese with c

Decided to head to the marsh, to reflect, gaze at