Born and bred in Norfolk, his father was a press photographer and keen sailor. From an early age Martin learned to sail at Brancaster and explore the creeks and sandbars where his love of wildlife started. At the age of eight Martin was learning to develop and print film in his father’s dark room.

After five years in the Royal Navy, travelling the world with camera in hand, Martin was next off to the North Sea, the Ivory Coast and Gabon working in the oil industry. Taking time off to explore Africa he ventured into northern Kenya where he met and worked with the late George Adamson of ‘Born Free’ fame. 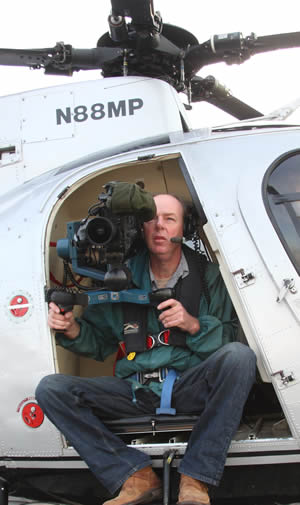 After gaining a distinction in photography at Southport College of Art, it was back to North Norfolk with an assignment to photograph wildlife at Pensthorpe Waterfowl Park.

A commission from Anglia Television followed with Martin subsequently joining their renowned ‘Survival’ team as a wildlife cameraman, travelling the world from the crocodile caves of Madagascar to the Amazon basin.

Martin has also worked on Series 1, 2 & 3 of ‘Wild Britain’ with Ray Mears and on the BBC Two Nature Series ‘The Burrowers’, presented by Chris Packham.

He has continued his long-term relationship with Ray Mears during the filming of the ‘Wild France‘ and ‘Wild Australia‘ series.

When not filming, or hanging out of helicopters, Martin can be found on his houseboat amongst the marshes, or with his daughter sailing at Morston on the North Norfolk coast..

A day of calmness with Andrew and Linda immersing

A spectacular end to the Blue Bell Safaris with Ca

Thinking of a Safari? You can stay here at base ca

A perfect days Safari with Louise and Paul, along

A delightful days Safari with Jeremy and Rachel. S

A great day yesterday filming the release of a pai

Absolutely brilliant to have a family of Otters at

Just Give Peace a Chance

A great weeks Safaris, with the marvellous weather

Spring has sprung, a days Safari adventure with La

Yesterdays Safari out with Gordon & Caroline, and